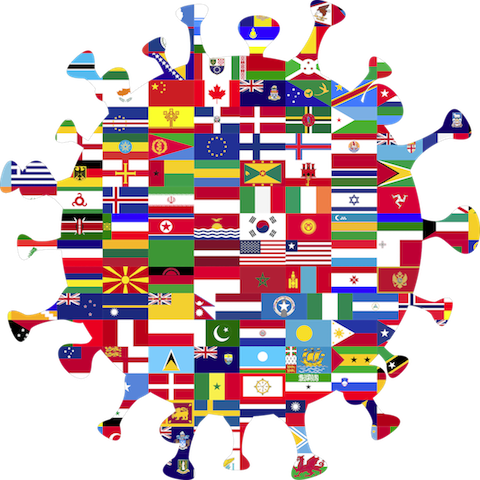 Happy "B'earthday™" on this 50th Anniversary of Earth Day!

A world of chaos gone chaUs has lost its North Star ...

A virUs connects us to show we’ve strayed far ...

If people and planet are one and the same ...

If everything’s birthed on the grandest of plains …

Then maybe this moment of lockdowns and masks …

Becomes invitation to remove our masks —

The ones that have covered a planet with in(dustry),

Ones that have smothered us with in(security) ...

Maybe the “maskerade" party has started,

By asking us to show up more tender-hearted.

The greatest threat to Humankind is a lack of Humankind(ness).

It's also our greatest Immune Boost.

Coronavirus is just one of many yellow flags waving in the face of further impending massive shifts to the natural world which pose an immense threat to that of our developed.

Climate Change is about more than just the weather. It's about whether or not we work together to Change the Emotional Climate. This is the root of nearly all our global ills, because how we perceive the world around us - and within us - characterises how we behave hereon toward Self and Other.

In a sense the Climate Deniers are right. The climate is always changing. But the size of the Earth is not. The Climate isalways changing. But so is the population, popping up in all sorts of places it previously hadn't or can no longer sustainably due to encroaching climactic climate shifts whose drought, flood, or rising temperatures create devastation ... forcing migration and geopolitical meltdown, the proportions of which we've been unable or unwilling to mitigate / accommodate thus far.

The more of us there are, unknowingly or knowingly living insensitive lifestyles rather than adapting to the natural world's rhythms (of which we are a part), the more we poke a hornet's nest of unknown threats ... much like a virUs that broadsided us.

The Arctic's melt generates rising sea levels; and not just in remote corners of the planet but potentially in major financial capitals like Singapore, New York City. Permafrost melt unleashes foreign bacteria into the seas and the atmosphere. How to contain air and water? Living the Corona lifestyle is an early warning.

Some say The 6th Mass Extinction has landed at our doorstep about 1000 years prematurely, due to over industrialisation which accelerated and intensified the trajectory and gave us precious little time to cultivate our creative adaptability capacities. Untenable geopolitical infrastructures contribute to and perpetuate extreme wealth and poverty. Any wonder, therefore, that marginalised societies consistently and deeply dipped in scarcity / depravity become security threats increasingly?

Large numbers of disrupted lifestyles are already evidencing their "mind-field of reactivity" in mere weeks of U.S. lockdown cities. The human psyche is unprepared for abrupt shifts; case in point, Corona.

The longer we remain idle when it comes to our extraordinary ingenuity and our ability to implement rapid systems changes which mitigate some of the Climate Crisis, the higher the stakes ... the closer that roulette wheel turns toward tipping point in the wrong direction. And according to Nature's warning signals it won't be a polite wakeup call at all.

Leadership now needs Healership to help steer the rudder of our utterly fragile and weary worldwide ship. From Top Down (Leaders of Nations & Corporations) and Roots Up (The Voting Public) here is a truly savvy and "Simpol" tool with which to do so:

Earth Day is everyday. But because we're disconnected from Nature and our Human Nature on a daily basis, we have a singular Day to remind us. Far more inviting than a virUs ... nevertheless, on this 50th anniversary we share the day together.

<blue>On behalf of Mother (Earth) and Father (Time), maybe its time to re-wind our minds. "Happy B'earthday", dear world, and here's to viewing the face of our Global Selfie from its good side:-):<blue>