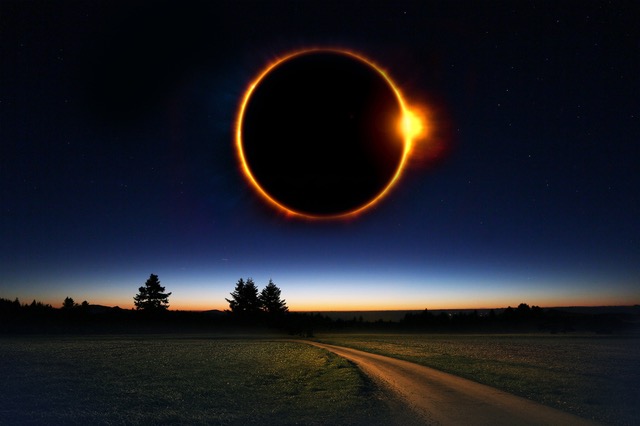 Misuse of Power & the Total Eclipse of the One (because with or without the sun, we're still in this together)

We wield it. Worship it. Crave it. Kill for it.

What is it? Where is it? In the seats of government or the corridors of kingdoms? In the media monoliths built by corporations or the cultural ones built over thousands of years of slave labour? Perhaps it's buried In the tweets of aggressive beings toward each other over billions of fiber optic networks ...

Many kinds for many minds, but unless we're mindful of how to use it we'll continue to abuse it.

Planet E has been powered by another kind ... a "remote" control whose command is as impersonal and non-negotiable as it is intimate ... and which reacts to the exploits of Human Nature trying to wield power over it  / will it to their advantage.

Nature is the Power behind the power. It is much more than a noun existing over there in the form of that tree. Nature is alive - within us and around us. It IS us, and squirm we should at the reckless use of it, and ourselves in relation to it. Nature is as inanimate a concept as the birth of a newborn, a thunderstorm - an idea. And when Nature displays her rare bit of reverent-worthiness to the masses like the recent total Solar Eclipse, we seem to pause in awe. For some it heralds the mystical; of impending doom or dawn. For others, a scientific wonder. For oblivious others, just another weary day in the life of a withered planet on August 21st, 2017.

But what begs questioning is why so many are so starstruck? Why do we only look to the skies to see what blinds? Perhaps because we're reluctant to see how blinded we ourselves are ... by our ancient inbred fear of that dreaded monster lurking within. Better to project heavenward, as spectators of an other's performance than to be stars of our own disturbingly earthly.

Ironically it was the United States bathed in physical darkness (an eclipse only visible to this one of the seven continental cousins), doubled down by the effects of an extended presidential one whose power source compulsively opens Pandora's Boxes with the finesse of a wrecking ball in the hands of a toddler.

Like a raging metaphor, we are living from our worldwide shadow side; in a kind of Total Eclipse of The One. It's conveniently obscured our overview of the Individual (person, nation) in relation to the Whole, which leaves a gaping hole. Last year's presidential campaign and subsequent victory heated up the socio-political landscape worldwide, casting its shadow like a glaring spotlight upon our invisible nature ... which then reared an enraged forgotten Voice ... which then swept its wrath across continents as if stirring awake our collective misperceived monster.

Now it glares at us, daring "What next?". Indeed.

Thought we were out of the woods, post WWII? Thought that we'd learned harsh lessons never to forget nor revisit? Thought that history could never repeat itself after that horrific whirlwind? Thought that electing a black president or a potentially female one (or a someday Jewish, Spanish or other one) would absolve us of harbored racist or sexist tendencies ... make it easier to live with our untamed conscience?

We installed memorials to instill learning ... classrooms, documentaries and conferences to insure understanding - all to guarantee our one way ticket from scorching embers of a modern-day journey into hellfire. Only to resurrect them less than a century later.

Came the rumblings. Came the stirrings. The terrorist upsurges. The Refugee Crises. The Brexits and Brexidents and unprecedented displays of discontent meted out and tweeted about in a kind of irreverent global group therapy akin to World War III - World War We.

But the tumult is inbred; World War Me.

So rather than pretending to be greater than we are ... or to deny who we fear we are ... let's get clear about who we truly are before Nature completely clears us of who we are forever.

The human condition is conflicted, imperfect, flawed - and our one redeeming feature is the ability to be Conscious of this and exert Choice about chiselling the rough edges or not. No right or wrong. Just is.

Like e= mc2, we=HU (we= humanity unaware). This may be our inherent human equation and the sooner we reconcile and respect it the sooner we can adapt to it with less surprises out of furious left (or right or wrong) field. Denying our paradoxical nature by constantly distracting ourselves from it or trying to move beyond it is to remain perilously stuck in it.

The world is at war alright; between Human Nature riddled with its false power of a run amok ego, and the egoless power of Nature. And there's a third phantom enemy at play: Human Nature at war within itself. Wise parental temperance couldn't be more needed, but the crafty ego camouflages itself with convincing conviction that it knows what's best - which inevitably gets us into trouble, individually and collectively.

The political landscape mirrors the psychological one. Hate him, love him, care not a whit about him ... this irreverent POTUS is an inescapable wake-up call by default. Whatever "swamp" he unearthed is up to us to clean because it was entrenched long before he ever "razed" our consciousness about it. The swamp water sat idle in the ego-eyes and made possible elections like this, Brexit, and the raging tides of change that are destined to sweep into the tiniest crevices of Planet E thanks to the internet.

So whatever we do or don't think about him, best we think twice about our selves - in the deepest sense of self. As astute political healers John Bunzl and Nick Duffell explain in their exceptional read, The SIMPOL Solution, we need to address not just our rage but our underlying grief - as entire nations who have been recipients of and done damaging injustice to one another. And then we need an exceptional footpath through this noxious thicket to a clearing. One that speaks in broad strokes to an entire global body.

SIMPOL has detailed a viable new paradigm for global governance which actually accommodates for and integrates global competition inherent to our nature, with a stunning new slant. And unprecedented events like Synchronistory are creative amplifiers and potential gamechangers which encourage a deep exhale and infusion of dazzling new breadth into our outmoded mindset.

On this rung of our ongoing spiral, we need to steer the fragile ship from Leadership to Healership, and somehow grok that the imperfections perceived by our smaller "human" mind are a riddle never to be fully answered / always to be questioned - and that there is a liveable way to do so.

The only way to redress the global playing field so it's better tailored to our true needs rather than our false beliefs is to get real. To truly know our "flawed" selves and allow those murky depths to surface, to breathe, in a way that neither penalises ourselves nor others for the feelings - but never incurs harm based upon these aggressive feelings. It's called Respect. And respect begins in small doses - toward Self, toward other, toward an animal, toward a plant, toward your glass of water, toward the chicken wings which were brought to you through the life of another living being you'll never know nor need to personally - yet you should know of.

Trump will flip flop and vascillate in his uproarious mixed messages. One day will be a call for Unity. Another will be a fight with the world-at-large. Or a molecule. Tempting as it is to believe what you will on whatever day-du-jour he states it, better to glean the golden nuggets embedded within all his histrionics: that our blind spots must be unearthed and aired, individually and collectively, on behalf of the global community. And this must be done with care. When we see clearer, we'll reflect this increasing clarity both online and more aligned ... between Nature and our Human Nature which are intrinsically linked.

We've been sentenced to Life. And our life sentence has been a run-on one, with only one predominant theme: Either / Or. Conquer & Divide. Time to change the paradigm. To AND. As the planet reacts to his tail light and that of other passed and current presidential comets, perhaps Trump's inadvertent legacy will become Divide & Unite. And it won't matter if he takes the credit or not; as long as we learn how to do it without believing we must obliterate / sacrifice our uniqueness and diversity in order to restore a sense of harmony / community. A flower is a species, within which there are millions of varieties. A human is a species, within which there are billions of varieties in kind.

Be kind - to your variety and others'. It's no one's fault we were all born without conscious choice or a User Manual, hurtling through the Universe with less understanding about our inner machinations than that of our very laptops or i-things.